(Friday, May 18, Los Angeles) – The Colburn School is pleased to announce that violinist Scott St. John
will join the Colburn School faculty as Director of Chamber Music, beginning in fall 2018.
In this newly created position, St. John will lead the chamber music programs in the Colburn School’s
degree-granting Conservatory of Music and pre-college Music Academy, creating a sequential and
collaborative pathway of training from the youngest students to most advanced ensembles.
Concurrently, the current co-Directors, Martin Beaver, Violin and Chamber Music Faculty, and Clive
Greensmith, Cello and Chamber Music Faculty, will focus on individualized training for both violin and
cello students. Greensmith will take over the cello faculty position previously held by Ron Leonard, who
retired in fall 2017 after after an almost thirty-year tenure.
“It is truly a privilege to welcome Scott St. John to the Colburn School community,” said Lee Cioppa,
Dean, Conservatory of Music. “His remarkable talents as a performing artist in chamber music,
orchestras and as a soloist, as well has his dedication to the art of chamber music and its unique and
specific contribution to the education of young musicians, exemplifies the excellence and virtuosic
teaching that is at the core of the Colburn School experience. Thanks to the outstanding work done by
Martin Beaver and Clive Greensmith, the culture of chamber music continues to infuse life at Colburn.
This newly created role will support a continuum of training under Scott’s direction, from our youngest
students in the Music Academy through most advanced Conservatory of Music students.”
“I have enormous appreciation for the excitement and energy that the Colburn School brings to its
programs,” said St. John. “I look forward to working with the talented students and joining the dedicated
faculty at Colburn, many of whom I have known and admired for decades.”
The Colburn School is known as a top talent-producing school for today’s most renowned chamber
music ensembles, including the Grammy-nominated Calder Quartet, The Calidore String Quartet,
winners of the 2018 Avery Fisher Career Grant, and Viano Quartet, who won third prize in the 2018
Wigmore Hall International String Quartet Competition and won bronze in the 2017 Osaka International
Chamber Competition.
St. John was a member of the esteemed St. Lawrence String Quartet and faculty member at Stanford
University for seven years, from 2006–2013. From 1999–2006, Scott was Associate Professor of Violin at
University of Toronto, and founded the Felix Galimir Chamber Music Award for university students.
Currently Scott is Concertmaster of the ROCO Chamber Orchestra in Houston, Texas. He also coaches
chamber music at Western University (Canada), and participates in the prestigious Marlboro Music
Festival (Vermont).
A recent recording of Mozart’s Symphonia Concertante with his sister Lara St. John won a Juno Award in
the Best Recording: Solo with Orchestra category. Working with composers has been important
throughout St. John’s career; he has worked with John Adams, Charles Wuorinen and Osvaldo Golijov in
the US, and composers in Canada, including Arsenio Giron, Gary Kulesha, and Elizabeth Raum.
St. John began his violin studies at age three with Richard Lawrence in London, Canada. He is a graduate
of the Curtis Institute of Music, where he studied violin with David Cerone, Arnold Steinhardt, and
chamber music with Felix Galimir.
St. John supports several transportation advocacy groups, including Transport Action Canada and the
Rail Passengers Association. He also supports HanVoice, a lobby organization for North Korean refugees
in Canada.
About the Colburn School
The Colburn School comprises four academic units united by a single philosophy that all who desire to
study music and dance should have access to top-level training. The degree-granting Conservatory of
Music, the Community School of Performing Arts, the Music Academy for pre-college musicians, and the
Trudl Zipper Dance Institute provide performing arts training to over 2,000 students from the Los
Angeles area and around the world. The renowned teachers, performers, and scholars that make up
Colburn’s dedicated faculty serve as invaluable mentors to guide students’ artistic development.
The Community School of Performing Arts acts as an entry point to performing-arts education, offering
beginning to pre-collegiate training in music to students of all ages and skill levels. The Trudl Zipper
Dance Institute includes dance instruction for young people and adults in ballet, tap, modern, and
musical theater. Also part of the Trudl Zipper Dance Institute is the pre-professional Dance Academy,
which prepares a select class of young dancers for careers in ballet.
Young musicians from around the world study at the Music Academy, which prepares high-school aged
students for further training at the world’s top conservatories. Finally, the Conservatory of Music is one
of the preeminent training grounds for classical musicians, with undergraduate and advanced degrees in
music performance.
A robust community engagement program delivers performing arts education to low-income students in
the surrounding areas. In addition, Colburn offers over $500,000 in scholarships to Community School
students each year. Located in downtown Los Angeles, the Colburn School’s campus boasts
state-of-the-art performance and rehearsal spaces. Each season, the school presents over 300 concerts
and performances, many of which are free and open to the public, at its downtown home and
throughout Southern California.
###

I’m joining Ensemble Made in Canada for concerts in Thunder Bay Sept. 30 & Toronto at the RCM Oct. 1: Royal Conservatory Event! And again for Waterloo & Hamilton on Oct. 15.

Some great musical happenings in early 2017… here’s a quick recap.

In January I was back in NYC to play with Carmit Zori on her terrific Brooklyn Chamber Music Society series. Shai Wosner, pianist, was amazing in Fauré g minor Piano Quartet.

Our 2nd Rebelheart Collective Concert at Aeolian Hall (London Ont.) took place in January, with a bigger crowd in attendance. Erika Raum’s mother, Elizabeth Raum, composed a two-violin duet that went over incredibly well, and I also enjoyed working with the El Sistema Aeolian kids on some Bartok Dances.

Later in January my family traveled to California: Sharon and Julia went north, and I went to San Diego to join the Enso Quartet for several concerts. My mini-career as quartet replacement violinist is going well! It’s such a rush to join a pre-existing group, especially with rep like Ginastera Quartet no. 2.

Early March brought a project that I was incredibly excited about: an all Canadian program that recreated Harry Adaskin’s recital for the BBC in 1930. Katherine Chi and Rafael Hoekman joined me for the Calgary concert, which included music by Healey Willan, Hector Gratton and Edward B. Manning.

To finish off this post, and the month of March, I was back in Houston for ROCO! What an amazing group, spearheaded by the ball of energy Alecia Lawyer. We did the string orchestra version of Schoenberg’s Verklarte Nacht– a tough piece but extremely satisfying. Also got to know composer Alex Miller who composed “ROCOMOJI”!

Here’s a backstage shot after a vivid Mozart Clarinet Quintet with Richard Stoltzman. A fabulous week as temporary 1st violin of Cecilia Quartet! 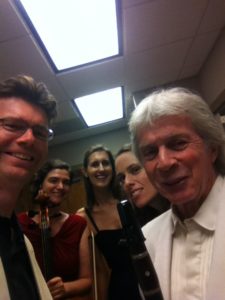